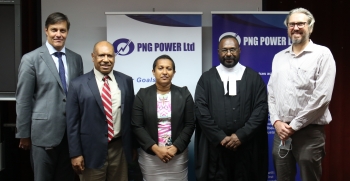 Mr Maladina, a former politician and a businessman, was appointed by the NEC on the 20th of January, 2021 and gazetted on the 27th, took his oath before Magistrate Mr Seth Tanei. He now replaces the outgoing former Board Chairman, Mr Peter Nupiri.

Two new female Board Directors as well were appointed by the NEC to serve under Mr Maladina’s chairmanship. Ms Akae Beach, who is a Business Woman and holds a Masters Degree in Accounting, and Ms Sarah Kuman, who has a Law Degree and specialises in Corporate and Commercial advice and natural resource law. Only Ms Beach was present to be sworn in as well.

In welcoming them, Mr Bekker said the experience that the Directors are bringing into PNG Power are exceptional. He said Governance is critical in a SOE, and it takes a broad level of experience.

“The PPL Chairman brings extensive experience from political leadership to , business.  PNG Power is very fortunate to have candidates of this calibre, joining the Board,” Mr Bekker said.

Mr Bekker also highlighted key fundamentals of being in the Leadership roles. He said ‘Leadership’ is a skill that can be learnt, that can be practised for  to master.

“What helps us in leadership skills, is to have role models. And ultimately for me personally, that’s what the Board is. Members of the Board are there to act as role models for the management and leadership team and broadly speaking across the SOE’s,” Mr Bekker said.

“I am very excited about the role models that are coming to support us PNG Power over the next three (3) years.