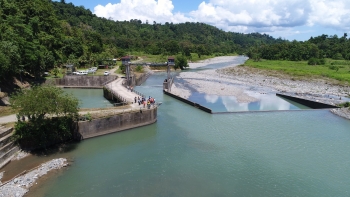 The Warangoi Hydropower Station in East New Britain was shut down over the weekend to undergo major rehabilitation works for the next 12 months.

PNG Power will still be able to maintain the power supply to its customers in the province through the Ulagunan Power Station in Kokopo and the Kerevat Power Station.

Peak power demand in East New Britain is 10MW and at the moment, Ulagunan is producing 7.6MW while Kerevat is producing 1.8 MW which enough cater for the current demand.

The Ulagunan Power Station’s generation capacity was boosted with the inclusion of leased machines which were brought in to provide extra generation for the period of the rehabilitation works. PNG Power is also completing overhauls of two generating units at Ulagunan that will provide an additional 2MW of reserve capacity within the next few weeks.

In the event that PNG Power faces generation capacity issues during the period of the rehabilitation, PNG Power will undertake load shedding and will also ensure normal power supply is restored.

The Warangoi Hydropower Station in the last several years operated below its full capacity of 10MW. The rehabilitation will ensure the hydropower station be capable of operating at its required capacity. This will also extend the economic life of the plants by another 20 to 25 years.

PNG Power and its joint venture contractors, AG Investments and Dongfang Electric International officially began work that will deliver a hydropower plant that will be able to produce power at higher capacity. Rehabilitation works include improvement works at the intake area, a new control room and refurbishment and replacement of all electromechanical components.

The Warangoi Hydropower Station rehabilitation comes under the Tranche 2 funding of Town Electrification Investment Program for PNG Power, a project funding between the Government of Papua New Guinea and the Asian Development Bank.

The rehabilitation of the hydropower plant is important for East New Britain Province and once it is complete, it will provide excess for PNG Power connect more households and businesses onto the East New Britain Grid.

It will also provide the opportunity for PNG Power to further engage with the provincial government regarding its electrification plans and for East New Britain to drive its development agendas.