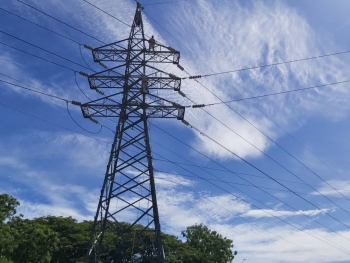 The Gerehu to NiuPower Gas Plant Transmission Lines project was completed on Saturday and successfully energized in the early hours of Sunday (today).

On Saturday, PNG Power and its contractor, Voltran Engineering began work on the final hook-up and connection into the NiuPower yard, which was the final task of the transmission lines construction.

PNG Power technical teams have been working hard behind the scenes to ensure all necessary electromechanical requirements were met for the final connection phase of the transmission lines between the Moitaka Substation, the Kanudi Substation and the NiuPower Gas Plant.

At 0100 hours early this morning, the transmission line was successfully commissioned.

The new line will slowly be loaded throughout the week and we are looking as we are expecting to export the full 58MW out from NiuPower.

It is a significant project for PNG Power as it marks the beginning of a complete fuel switch from heavy fuel oil, diesel and hydropower to Gas and hydropower for the Port Moresby Grid.

This means PNG Power will no longer use diesel to generate power in Port Moresby but utilise it for standby purposes.

The significance of this occasion is that it is a step in the right direction towards achieving low cost generation under PNG Power’s Reform Agenda and also becoming more responsible to the environment by reducing heavy carbonated fuels.

The new transmission line will enable the NiuPower power plant to fully dispatch its 58MW capacity now and also the Dirio Power Plant when it comes online. With both these power plants situated in the western corridor, reliability of the power supply for POM is significantly enhanced.

The Port Moresby grid is all set to run without diesel in 2020 and shows that the Least Cost Development Plan is falling into place. The same will be slowly undertaken in other centres as well.

These developments will underpin a financially viable PNG Power that will reverse years of financial stress, and over time lead to cheaper tariffs that in turn can drive electrification intensification and PNG’s industrialization.