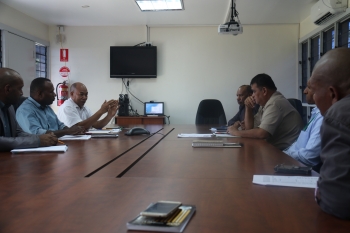 According to the Social Media post (FB), the Doctor raised the issue that the recent unplanned power outages and load shedding of power supply in Port Moresby caused medical equipment failure in their laboratories/wards and has affected their duties.

During the meeting, discussions concluded that the power quality issues faced by Port Moresby General Hospital was previously identified by PNG Power. A recommendation was made to the then hospital CEO and management to come up with a Memorandum of Understanding (MOU), so that PNG Power can install a power-factor equipment that was already sourced and has been awaiting installation since 2013.

PNG Power also noted that some of the buildings are old and under cables are unable to cater for the current power load for the hospital. PNG Power offered solutions to resolve the matter.

It was also discussed and an agreement was reached between PNG Power and POMGEN that all future equipment purchased by the hospital must be certified by PNG Power according to its operational standard, before any installations takes place.

PNG Power also offered to do a survey on the power qualities of the existing transformers installed at POMGEN, as well as all cables and lines, existing medical equipment and connections, to ensure they meet PNG Power standards.

PNG Power Acting CEO, Mr Mageo said that PNG Power responded and called for a meeting with the hospital management following the Social Media post and an article in the Post-Courier last Wednesday.

“We thank the hospital for raising this. Our Technical Teams will now be working with the Port Moresby General Hospital as part of its Community Service Obligation and assist to ensure that these issues are not allowed to happen again,” he said.

Mr. Mageo said that PNG Power has a good relationship with the Port Moresby General Hospital as evidenced by the support provided annually during the Operation Open Heart and other hospital requests.

He said that PNG Power has a dedicated feeder for the Port Moresby General Hospital which is always given priority when there are unplanned outages or when there is load shedding.

“Our hospitals are essential services and we endeavour to minimise any impact of power supply issues,” said Mr. Mageo.